The Global Apple Activity is an educational demonstration that shows how much land there is on earth to use for agriculture uses. 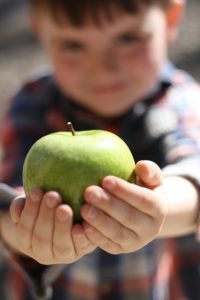 One of the most important natural resources that covers much of the earth’s land surface is soil. All living things depend on it as a source of food, either directly or indirectly. Our food producing land remains the same and yet the world population continues to grow. Consequently, each person’s food portion becomes smaller and smaller. It is the responsibility of each generation to use the soil wisely to insure the future. The following demonstration will show how little of the earth’s surface is actually used for food production as compared to growing populations.

So let us pretend our apple is the earth. 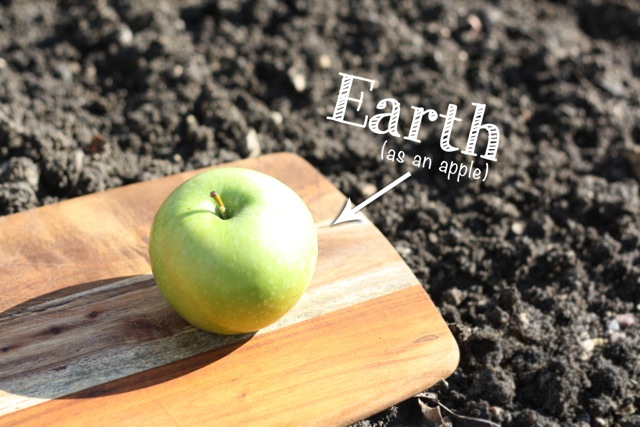 1. Cut the apple into four equal parts.  Three parts represent the oceans of the world.  The fourth part represents the land area.  Place the three “ocean” parts on blue paper and the one “land” part on brown paper.

2. Cut the land section in half lengthwise.  Now you have two one-eighth pieces.

Ask students:  Can we (man) live anywhere on land on the earth’s surface?  Is there anywhere that just wouldn’t be suitable for us to build a house and live?

Ask students:  Can we grow crops for food or graze cows for meat and milk here around our school?  In your neighborhood?

Explain that three of these one thirty-second sections represent the areas of the world which are too rocky, too wet, too hot, or where soils are too poor for production, as well as areas developed by man.  Only one section is suitable for production.

4. Carefully peel the last one thirty-second section.  Explain that soil is only on the very top layer of the earth’s surface so this small bit of peeling represents the soil of our earth on which mankind depends for food production!  Take the other whole apple and put the small peel next to it so students can see the very small part of the earth where soils are suitable for food production.

5. Discuss the fact that the world’s population continues to grow so it is even more important that we take good care of the land we have!