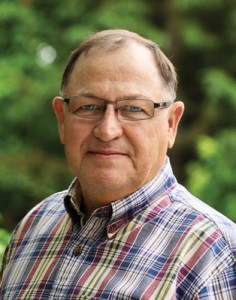 Visionary, Genuine, Perseverance are a few words to describe Bruce Dalgarno and his commitment to the canola industry. But for Bruce, it’s his passion that drives him to make a difference. His dedication to the canola industry was recognized on February 17, 2015 at Crop Connect in Winnipeg, MB at the gala banquet. Bruce Dalgarno received the Canola Award of Excellence in front of fellow farmers and industry members.

Looking back on his 19 year involvement in the canola industry, he wouldn’t change a thing. “It’s was a great experience but really it was all the people that I met in the industry that made a difference on me” Bruce states.

He along with past Award winners Jim Green, Dawn Harris and Max Polon were drivers behind the Manitoba Canola Growers Association implemented the check off system and when it was needed to increase check off from $0.50 to $1.00 Bruce did it all again.

“Bruce Dalgarno is a leader who worked passionately for the farmers of Manitoba” states Ed Rempel President of Manitoba Canola Growers.

Bruce always took the challenge, never wavering on what was the right thing to do. Over the years, Bruce was the Chairman of the Canola Council of Canada and Presidents of both Manitoba Canola Growers and Canadian Canola Growers. He was involved in the Integrated Pest Management which evolved to Pesticide Harmonization project with Canada, US and Mexico.

“It’s hard to look back on his involvement in agriculture and narrow down all of the achievements, Bruce was always there leading the charge” says Bill Ross Executive Manager.

Honorable JoAnne Buth worked with Bruce when she was at Canola Council. One of the qualities that she admired about Bruce was that “he sees a challenge and he does not give up”.

Bruce farms with his wife Carol and his son Andrew in Newdale, Manitoba. They operate 3600 acres of cereals, oilseeds, grasses and pedigree seeds.