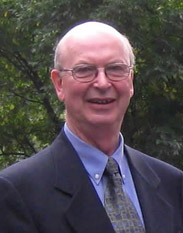 Charlie was born in Carman, MB on November 27, 1941. He received his grade school in the one room school in Homewood. His secondary schooling was in St. John’s Ravenscourt in Winnipeg and Western Military Academy in Alton, IL, USA. He received his Diploma in Agriculture from the University of Manitoba. He has also taken many courses in agriculture, accounting, electronics, investing and computer courses through the Universities of North Dakota and Minnesota, as well as Red River Community College, and Devry Institute.

Charlie and Bonnie Strachan were married in 1964, after a 2-½ year engagement. They farmed at Homewood from 1962 to 1996 Their union was blessed with two daughters: Karla & Nichole. They have one Grandson, Beren. They farmed in partnership with Charlie’s brother Frank until 1977 at which time he and Bonnie set up a corporation to run their business.

In 1981 Charlie set up a Cash Advance program for canola for the Canadian Canola Growers Association through the Government of Canada. Charlie managed the program, with the assistance of Bonnie, until their retirement at the end of 2000. The program had grown to include several crops, in addition to canola, by then. The cash advance had been built up from nothing to a $200 million program. At that time, they retired into their new home in Carman.

Charlie served on many boards including the Homewood Pool Elevator, Homewood UGG, Homewood Co-op, Homewood Community Club, Carman and Community United Way, Carman United Church, Manitoba Canola Growers and the Canadian Canola Growers Associations. He was Carman’s “Citizen of the Year” in 1984 and received the “Certificate of Merit” from the University of Manitoba in 2001 in recognition of his outstanding contribution to the agricultural industry and the public at large.

Charlie and Bonnie love to travel and take their family when possible. They have been to most states in the USA including Hawaii and Alaska. They have been to all of Canada’s provinces and territories except the NWT and Nunavit. They have traveled to Africa, Europe, Japan and Hong Kong and hope to keep adding to the list.