Verticillium Stripe, caused by Verticillium longisporum, is a soil-borne fungal disease, which primarily attacks canola and also other members of the family Brassicaceae. The disease can be spread through the movement of soil and seed that contains infested crop debris. Once introduced, the microsclerotia (overwintering and resting structures) produced by the fungus can survive many years in soil even in the absence of host plants. Therefore, eradication or control efforts should focus on the elimination of these structures in infested areas, and reducing movement of soil from infested to non-infested areas. 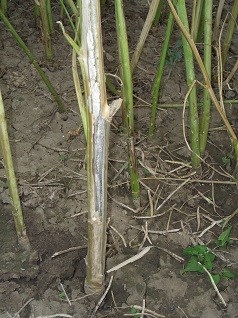 Canola infected with Verticillium longisporum was discovered in Manitoba in 2014. This prompted follow up soil surveys by the CFIA in 2015, which did find V. longisporum in Alberta, British Columbia, Manitoba, Ontario, Quebec and Saskatchewan.

While this is the first report of this particular pathogen in Canada, V. longisporum can affect a number of annual and perennial plant species in both temperate and subtropical zones and is present in oilseed rape in Sweden, Germany, Poland, Ukraine, Russia, France, the Czech Republic, Belgium, the Netherlands, the U.K. and Japan. First reported in 1960 in Sweden, the disease is now fairly widespread in Europe.  Closer to Canada, V. longisporum has also been found in cauliflower in California and horseradish in Illinois. The pathogen can infect many crops (broccoli, cabbage, cauliflower, horseradish, radish, and canola) and wild mustard in the mustard family. 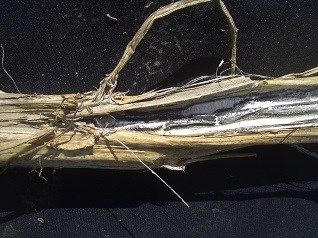 While the disease is capable of significant yield loss if infection is established early, with yield losses in Europe reportedly being 10-50%, severe yield losses have been confined to isolated fields and have not been reported as significant in regions or large areas.

One of the most important factors affecting yield loss is reduction in seed size and lipid content.

For more information see Verticillium in the Canola Encyclopedia