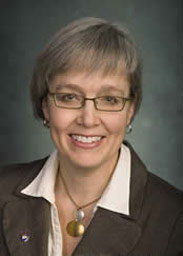 Dr. Scarth received her doctorate from the University of Cambridge in plant breeding and genetics in 1981. After a post-doctoral fellowship with Agriculture Canada, Dr. Scarth joined the Department of Plant Science at the University of Manitoba. Dr. Scarth worked with Dr. Baldur Stefansson in the canola breeding program from 1982 until his retirement. Her research focused on the development of canola/rapeseed cultivars with modified seed oil composition, the application of new technologies to genetic studies in canola and improvements in the seed quality and production characteristics of canola and rapeseed. With her colleagues in the canola breeding program, Dr. Scarth is the co-developer of over 30 canola and rapeseed cultivars with special oil quality traits including the world’s first canola cultivar with low linolenic oil quality. She has a career total of over 60 publications. From 2001-2005, Dr. Scarth served as the Associate Dean Research for the Faculty of Agricultural and Food Sciences with responsibility for the administration of the Faculty’s research programs. Dr. Scarth received an Honorary Life Membership from the Manitoba Seed Growers Association in 1998 and an Honorary Life Membership from the Canadian Seed Growers Association in 2000.

Her current position is the acting Associate Vice-President Research and Director, Office of Research Services at the University of Victoria (BC), with responsibility for strategic planning and policy functions, development of budget framework and planning, administration of regulatory committees in support of research, and the direction and overall management for the operational units within the research support services.