The following entry was provided to us by Winnipeg’s Shel Zolkewich.  Thanks Shel for sharing this story with us. 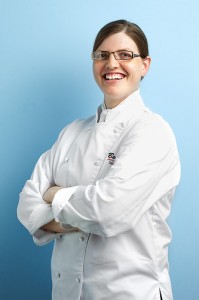 Chef Mary-Jane Feeke is about to add one more title to her venerable list that already includes pastry chef for Manitoba’s culinary Olympic team, teacher and owner of Benjamin’s Gourmet Foods in Selkirk. She’s now the recipient of the 2012 Canola Award of Excellence, presented by Manitoba Canola Growers Association (MCGA).

“I always have used canola oil,” said Feeke. “It was a choice I had made even before I met anyone from the Manitoba Canola Growers.”

Since 2008, the MCGA has been acknowledging the accomplishments of individuals and organizations that contribute to the sustained growth and prosperity of Manitoba’s canola industry.

Bruce Dalgarno, treasurer of the board of directors of the MCGA said Feeke’s commitment to canola oil made her a natural choice for this year’s award.

“Chef MJ is a supporter of local healthy foods and ingredients like canola oil. As a canola grower, I am proud to have chefs like MJ use our ingredients. I know Chef MJ takes pride in creating her amazing dishes,” he said.

Feeke said her decision to use canola oil is so much of her cooking and baking isn’t based on just one thing.

“I use canola oil because it has a high smoke point, doesn’t impart any flavour— which is particularly great for baking—and it has many health benefits,” she said. “I also always use canola margarine.”

Feeke said canola oil seems to be gaining more and more traction all the time when it comes to how it’s used in the industry.

“Canola is perceived as a healthy choice. Many chefs still feel that butter or olive oil are needed for their taste, but you will see the trend now of combining the two to cut down on fat,” she said. That means instead of using a ¼ cup of butter in a recipe, chefs will now use one tablespoon of butter and three tablespoons of canola oil.

Making healthier choices is all part of an ever-increasing interest in food. Feeke said we can thank the media for that.

“I think this is great for our industry. Making the profession of chef more notable than it had been in North America is a good thing,” she said.

Dalgarno said the award was established to give a nod to the key contributors in the canola field.

“MJ has become an ambassador for canola. She believes in the product and uses it in all her culinary applications. She is indeed a leader in her field,” he said.

The first recipient of the award was Dr. Baldur Stefansson of the University of Manitoba who is widely regarded as the father of canola. Other recipients have included researchers and individuals that were instrumental in setting up the canola growers organization.

“Now we are honoring the culinary part of the canola industry with an award to Chef MJ Feeke,” he said.

Late last year, Feeke expanded Benjamin’s Gourmet Foods by opening the doors to The Cellar. The space—next door to the original operation—includes a banquet space, classroom workshop area and a wine cellar with a chef’s table that seats 20 people.

Also on her agenda is the final stretch in preparations for the World Culinary Olympics in late 2012 in Erfurt, Germany. The event is held every four years. In 2008, Feeke was a support member for Team Canada. The team won four gold medals and placed fifth in a field of 32 countries.