February 17, 2022 (Winnipeg, Manitoba) – Today, the Manitoba Canola Growers Association presented the Canola Award of Excellence to Ned Bell, owner and chef at the Naramata Inn, for his active role in promoting canola oil in the kitchen and his long-time commitment to supporting farmers across Canada. 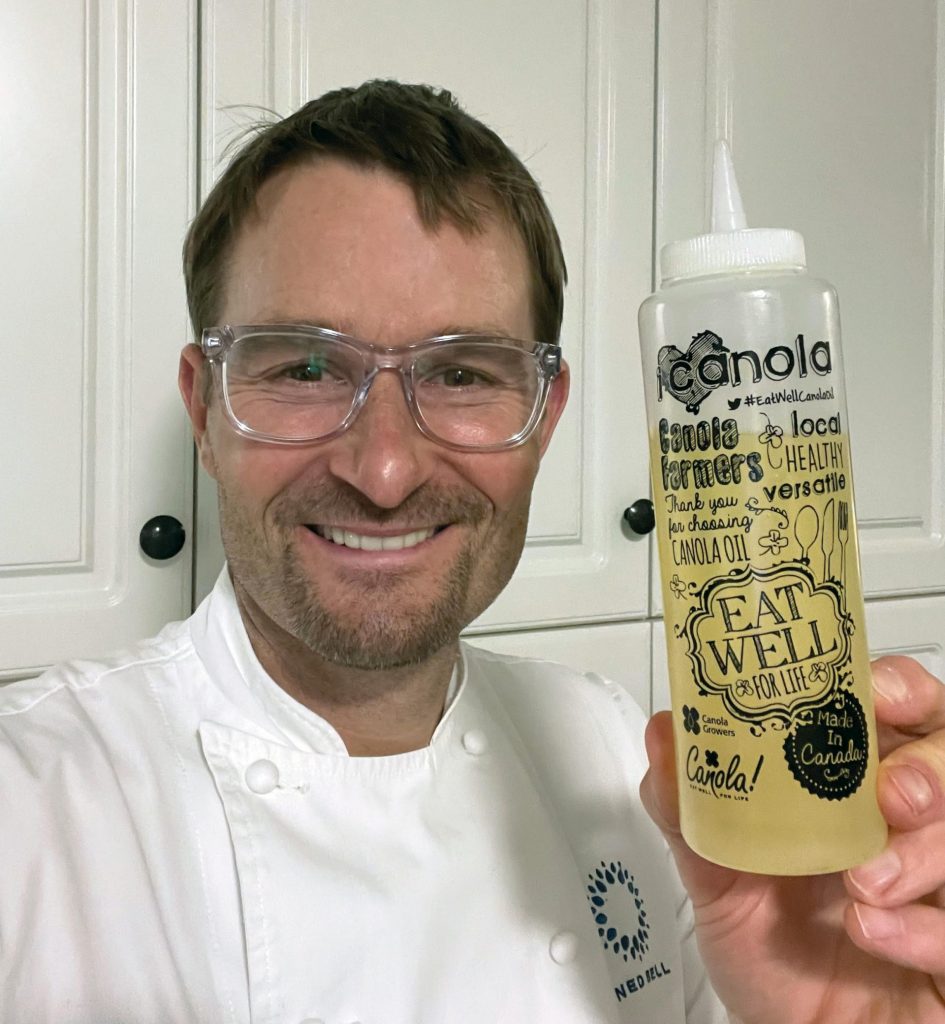 “What an honour, I’m incredibly grateful to be recognized with the Canola Award of Excellence. It is truly my pleasure to be able to celebrate farmers, and work with them from coast to coast,” says Ned. “I have worked with Canola Eat Well for years, and I love canola oil – it is one of my favourite ingredients in many of my dishes.”

Ned has been using and promoting canola oil in the kitchen throughout his career as a chef, keynote speaker and educator. His primary advocacy work has been supporting the long-term health of the world’s oceans, lakes and rivers; which extended inland throughout his career to being a champion for Canadian farmers and their stewardship. Ned has been engaged with canola farmers for years, and has worked closely with Canola Eat Well as a canola ambassador and guest chef at numerous events and workshops, promoting the versatility and functionality of canola oil across the country. “At the end of the day, I’m one of the lucky ones because I get to do what I love, and I couldn’t do it without canola farmers,” added Ned.

“Canola farmers, and those of us who support them, are so grateful for advocates like Ned,” says Delaney Ross Burtnack, Executive Director, Manitoba Canola Growers Association. “His commitment to sharing the real story of farming in Canada, and particularly coming to the aid of canola farmers when their biggest market was threatened in recent years, demonstrates his selfless commitment to building a better network of understanding and support for Canadian farmers. Ned is among good company of people who have gone above and beyond for canola farmers, and I’m thrilled we can do something to recognize Ned for his efforts.”

Manitoba Canola Growers would like to thank Ned for his active role in promoting canola oil in the kitchen, advocating and educating consumers, and contributing to the sustained growth and prosperity of Manitoba’s canola industry. For more information, please visit www.canolagrowers.com/about-mcga/canola-award-of-excellence/.

About the Canola Award of Excellence: The Canola Award of Excellence is presented annually and recognizes the accomplishments of individuals and organizations for contributions to the sustained growth and prosperity of Manitoba’s canola industry. The award was first presented in 2008 to Dr. Baldur Stefansson for his work in creating a new edible oil seed which we know today as canola.